Long Clawson Dairy is a traditional British cheese producer, based in the small village of Long Clawson in the county of Leicestershire.

An introduction to Long Clawson

Although best known for our Blue Stilton, we also produce a number of other delicious English cheeses and cheese products, such as Blue Shropshire, Rutland red and a range of sweet & savoury cheese blends. We take pride in crafting 100% British cheese, using century-old expertise alongside innovative techniques to make each one of our products truly unique.

The Long Clawson Dairy story began in 1911. One of our founding members, Thomas Hoe Stevenson, was running Mount Pleasant Farm near Melton Mowbray, alongside his two sisters who produced Stilton cheese in a room adjoining the main farmhouse. In order to ensure this special cheese would continue to be produced for generations to come, Thomas Hoe canvassed the opinion of local farmers for the development of a dairy. He soon had 11 partners, and the group purchased an old empty pub – The Royal Oak – in the village of Long Clawson. Long Clawson Dairy’s head office resides there to this day and we honour Thomas Hoe Stevenson by using his name for our premium brand. Long Clawson has remained a farming co-operative since its formation, helping to support local farms for over 100 years. Today, over 43 farms in the Leicestershire, Nottinghamshire and Derbyshire areas supply us with 58 million litres of milk every year – ensuring future prosperity for years to come. 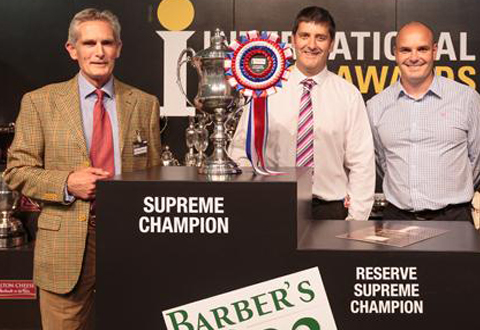 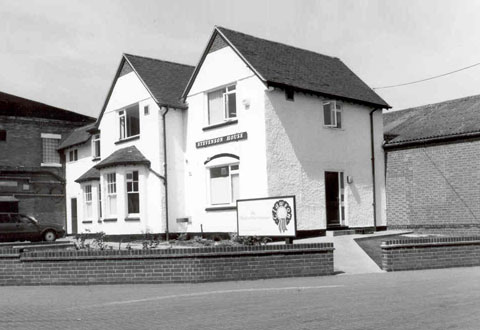 Expansion was rapid in the first few years after Long Clawson was established, and we constructed a second dairy two miles away at Hose. Wells that were built near both to supply water to the dairies had to be deepened. The onset of the First World War created problems for dairies and cheesemakers including ours: the import of cereals and oil seeds to make cattle feed was restricted; dairymen were enlisted; and production declined. However, as the demand for milk increased, so too did its price; and Long Clawson Dairy began supplying milk to London. Even at the end of the war, demand for milk remained high.

Demand for milk soars during the Great War 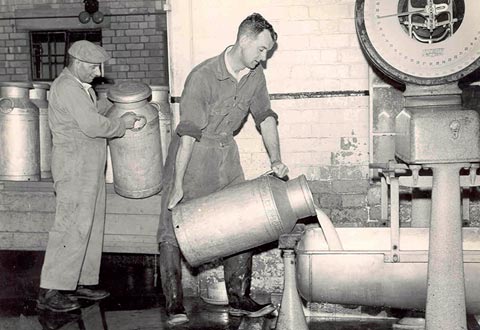 As milk prices dropped in the early 1920s, many dairies faced financial ruin and were swallowed up by the dominant United Dairies. We decided to stay independent: a brave move in desperate times. There were new hygiene and technological advances. A telephone was installed in the dairy office, and a new-fangled electricity generator powered lighting and fans. Yet none of this was enough to prevent the Long Clawson Dairy from recording a loss in 1926. But, with new staff and the introduction of smaller English cheeses, recovery was achieved again in 1929 when the full season’s cheese capacity was sold.

Industry faces ups and downs, but Long Clawson Dairy is a survivor 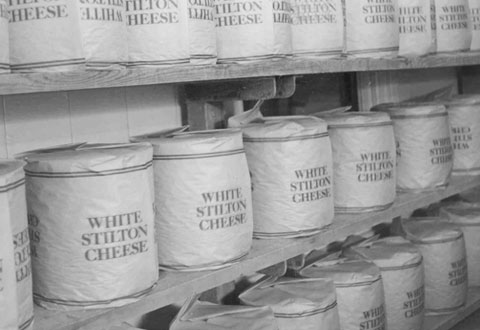 Three million people were unemployed in Britain in 1931. For many families, even a crumb of cheese was a luxury, and the knock-on effect for the dairy industry was immense. Long Clawson again recorded a loss and employees were forced to work an extra hour per day and take a 10% wage cut. The farmers’ co-operative took the reluctant decision to offer the business for sale in 1935. A private buyer was found, but at the last minute could not raise enough capital. Long Clawson had survived another difficult decade. In a move that would protect the production of Stilton cheese in the future, the Stilton Cheesemakers’ Association (SCMA) was formed to lobby for regulation to protect the quality and origin of the cheese. 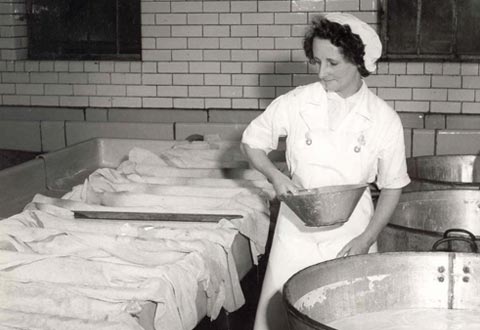 Many once-busy dairies were stilled during the early 1940s: unlikely casualties of the Second World War. Like the others, Long Clawson Dairy was ordered to stop production of Stilton in 1939, but we were able to remain in operation thanks to investment in the latest equipment and techniques, which allowed us to convert to Cheddar production, the chosen cheese for rations. Nonetheless, the Hose dairy was mothballed and it would be another nine years before Stilton was produced again.

Stilton production stops…for a while 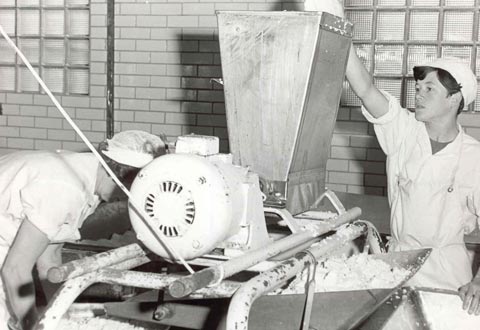 Stilton cheese is back in fashion

Food became fun again in the 1950s, with the appearance of bananas, peppers, pineapple and garlic. The middle classes were inspired to eat more adventurously, inspired by Elizabeth David’s books on Mediterranean cuisine and Fanny Cradock’s exotic approach to cooking. No dinner was complete without a cheeseboard, and no cheeseboard was complete without Stilton. Long Clawson prospered as demand increased and our Blue Stilton won the Perpetual Challenge Cup for Best Stilton at the London Dairy Show in 1953. Demand for milk increased too, and by 1960 Long Clawson was selling 4,400 gallons of milk a day compared to just 40 gallons in 1940. 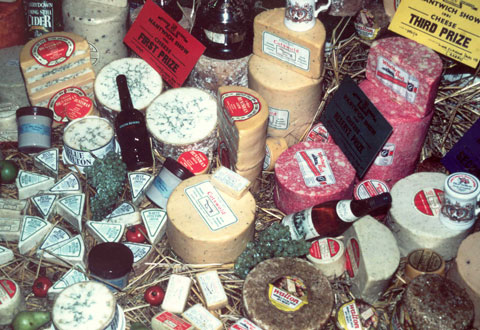 Long Clawson Dairy launched its first blended cheeses in the mid-1960s, buying in base cheeses such as Double Gloucester and Cheddar and adding new flavours to them. Many of these blends, including Cotswold cheese, Huntsman cheese and our White Stilton fruit blends are still sold today. In a milestone for the industry, the SCMA achieved legal protection for Stilton cheese in the form of a certification trademark, ensuring it could only be produced in the three counties of Derbyshire, Leicestershire and Nottinghamshire. It remains the only English cheese to have been given this level of protection. 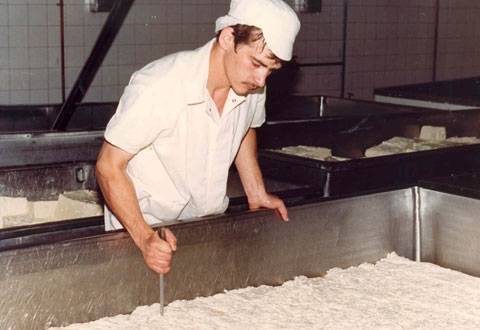 Further expansion took place in the 1970s, with a third dairy established in Bottesford to produce the popular blended cheeses. Long Clawson now employed 200 people, delivering 4,400 gallons of milk to 16,000 customers and producing over 100,000 cheeses a year. The SCMA continued its campaign to protect English Stilton producers from imposters from as far afield as Wisconsin in the USA. Eventually the American producers were forced to remove the Stilton name from their packaging. 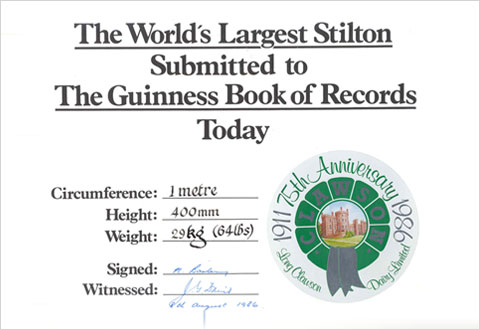 The milk market was tough in the 1980s, as competition emerged from supermarkets selling low-cost milk; and health concerns prompted consumers to reduce their consumption or switch to low-fat alternatives. Long Clawson decided to focus on cheese production, and sold off our milk division. By contrast, the cheese division went from strength to strength and we opened a new dairy at Harby, specifically to make Stilton cheese, in 1984. We were now producing 325,000 cheeses per year, and winning awards left, right and centre. 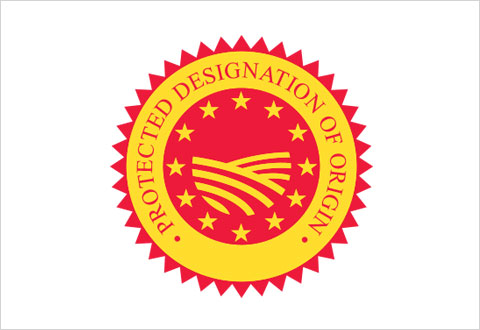 Long Clawson Dairy continued to create new products, including Paneer, which reflected the dominance of Asian restaurants on British high streets. As consumer tastes became even more adventurous, the dairy continued to work on new blends such as Innkeepers Choice. In 1996, the SCMA succeeded in securing Protected Designation of Origin (PDO) status for Blue Stilton, alongside the likes of Parmigiano-Reggiano, Champagne and Balsamic Vinegar. From now on, Blue Stilton could only be made in the three designated counties to a strictly controlled method.

PDO governs where Stilton cheese is made

Long Clawson Dairy continues to thrive and innovate, investing in new buildings and facilities and creating award-winning British cheese. The Long Clawson Dairy co-operative continues to be run by farmers – many of whom are descendents of the original 12 – and relies on local milk from over 41 farms in Leicestershire, Nottinghamshire and Derbyshire to create a range of very special cheeses.

Long Clawson Dairy was founded on 6 November 1911 and started to make Blue and White Stilton cheeses in the former village inn, The Royal Oak