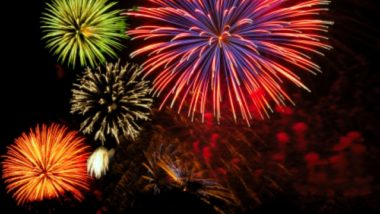 The 5th of November is the day when people across the UK celebrate Bonfire night. Fireworks, bonfires and sparklers will be seen all around!

Many villages in the UK will have organised bonfires and fireworks displays, whilst others may choose to have their own small one in their back gardens.

The reason for this celebration?… the Gunpowder plot. This was an attempt to blow up the Houses of Parliament in 1605. The main protagonist was Guy Fawkes, aiming to kill King James I in his attempt to blow up parliament. The reason? Differing religious beliefs. England was a protestant country and the plotters were Catholic. They wanted England to be Catholic again. By killing King James I and his government they thought they could do this.

The plotters placed 36 barrels of gunpowder in the cellars underneath the Houses of Parliament in London. This was to create a massive explosion.

However before they could set it off, an anonymous letter was sent to William Parker, the 4th Baron Monteagle, warning them to stay away from Parliament on the 5th of November. The plot was discovered… guards broke into the cellars arresting Guy Fawkes, and, eventually, after finding them, arresting the rest of the group as well. The group were all either killed whilst resisting arrest or executed after capture. Parliament declared November 5th a national day of thanksgiving. The first of which was celebrated in 1606.

In some towns around the UK there are more traditional celebrations of the night, however, many are family friendly evenings filled with fireworks displays and bonfires to keep us warm. The fireworks are made of similar explosives to those Guy Fawkes would have used (in a smaller and more controlled fashion), this helps to mark the occasion, a celebration of the plotters lack of success.

Whilst bonfire night is all about celebrating with fireworks and fire, food is also a big part. Toffee is a common theme, with toffee apples and treacle toffee being traditionally eaten. Yorkshire Parkin is a very traditional recipe for bonfire night… a sticky ginger cake perfect for colder nights. Why not give a different recipe a go with Toffee and Apricot meringues including our White Stilton and Apricot cheese? Or if you still want some ginger why not give Mango and Ginger Bitter Bites a go with dark chocolate covering pieces of White Stilton Mango and Ginger cheese?

Make sure to stay safe on bonfire night, and keep your pets safe too! Look up the rules of fireworks before using them and make sure everything is planned in a safe manner!