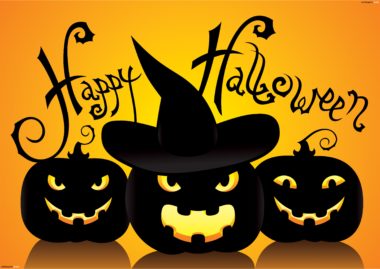 Halloween has many variations in its name from All Hallos eve to Allhalloween. It is celebrated on the 31st of October and begins the 3 days of Allhallowtide, dedicated to remembering the dead.

The origins of Halloween are disputed with some believing that the Celtic Pagan festival of Samhain (summer’s end) is where it all started. This festival celebrated the end of the harvest season. People believed it was a time when spirits could enter our world and damage crops. A feast was had in households around the country, with places set at the table to make spirits feel welcome, and bonfires lit to keep away unwanted ones.

Dressing up began with Celts donning white with blackened faces in an attempt to trick the spirits. This was adapted by the church in the 11th century where children would knock on doors asking for soul cakes (sweet cakes with a cross on top) in exchange for praying for souls of friends and relatives. This was called ‘souling’. The children would dress as saints, demons or angels.

Trick or treating that we can relate to today, began in the late 16th century in Ireland, Scotland and Wales where people would knock on doors in costumes asking for food in exchange for a poem or song. This changed slightly again in the 19th century where children would offer the songs, poems and jokes in exchange for fruit or money.

Trick or treating found today originated in America in 1927, when immigrants brought over the Halloween traditions… Pranks and sweets were given and had by all.

The Victorian ages saw more adventurous costumes such as bats and ghosts. From then on costumes have taken on a more ‘anything goes’ attitude with scary superheroes and peoples favourite characters commonly seen.

Pumpkins are something you will definitely see during Halloween usually with a carved scary face and flickering candle inside. The carving of vegetables began during the Samhain festival where Gaels (Gaelic speakers originating from Ireland) would carve turnips to prevent spirits settling. In the 1840s Irish immigrants could not find turnips to carve and so turned to a popular harvest of pumpkins, thus began the tradition of carving pumpkins.

We hope you have a spooktacular Halloween filled with sweet treats and scary pranks. If you want to try something a little different as a Halloween treat why not give our White Stilton with Mango and Ginger Bitter Bites a go, for a quick and easy sweet treat to be enjoyed with all the family.